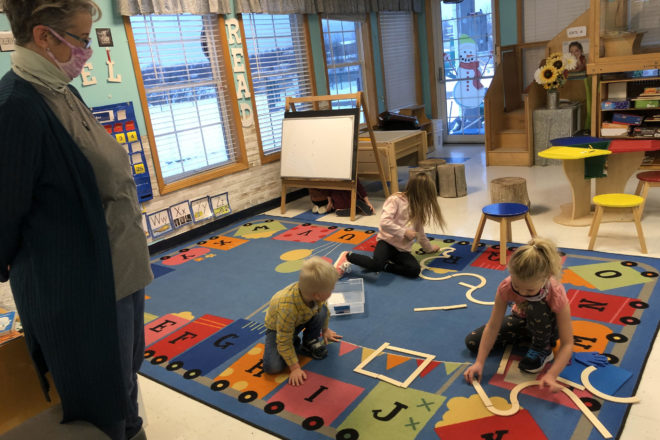 Northern Door Children’s Center will add a second classroom, and Gibraltar’s campus will provide one classroom this school year for a new, public 4-year-old pilot program that will be available to all 4-year-old children in the district. File photo by Craig Sterrett.

Gibraltar Area School District educators are preparing to offer public 4-year-old kindergarten (4K), making the district one of the last in the state to offer the program. But when 4K classes start Sept. 6, Gibraltar certainly will not be starting from scratch.

New Gibraltar Elementary Principal Lauren Ward has taught older children, but she earned her initial bachelor’s degree in early-childhood education and served for five years as a board member of Peninsula Preschool, which had curricula for young children. Ward will be responsible for directing the programming.

Since 2007, Northern Door Children’s Center in Sister Bay has offered a curriculum designed to prepare 4-year-olds to transition to Gibraltar kindergarten after a school year, and the facility has kept a certified teacher on staff who will teach one 4K classroom this year.

This fall, Northern Door Children’s Center will add a second section of 4K classes, with a teacher hired by the Gibraltar District, and Gibraltar officials lined up staffing and identified a classroom for a 4K section on the Fish Creek campus.

District officials hesitated for many years to establish public 4K until they could preserve all the private preschool programming and facilities that are available in the district.

“This is a united, joint pilot effort for the 4K program,” Ward said. “We’re a team working together. With Northern Door Children’s Center, along with Peninsula Preschool and the Dragonfly program at The Ridges, we’ve had a rich tradition of 4K education in northern Door County for decades.”

“As far as planning at the Northern Door Children’s Center for the pilot program, they’re further along because they already have a 4K program,” Ward continued. “They’ve been a wonderful guide in helping us get up to speed with best practices for what’s going to work best for all of the community’s children who take advantage of the program.”

Gibraltar District parents will soon receive detailed instructions and an invitation to a districtwide orientation day in August.

“All new 4K families will either come to Gibraltar or to the Children’s Center on the same day, at the same time, for families to meet their teacher, for children to get comfortable and get situated, and drop off any supplies they might need,” Ward said.

The district will reach out to the other 4K programs in the community for input, such as Dragonfly at The Ridges Sanctuary and Peninsula Preschool. It will also form a community advisory committee for anyone who’s interested in 4K education.

The district bus routes will include morning stops at the Gibraltar and Northern Door sites, and the district will add a midday route and designated locations where guardians can pick up children at the end. This year, the pilot program lasts for the first half of the school day.

Ward said the Northern Door and Gibraltar leaders have collaborated to determine staffing needs and equip the classrooms for the proper amenities, resources, educational experiences and furniture.

Northern Door Children’s Center already had suitable facilities for 4K, but it is building an addition to make its facilities even more appropriate for 4-year-old kindergarten, said Cindy Trinkner-Peot, Northern Door’s director. Construction began this month on the multipurpose room that can be divided into two 4K classrooms, and the center’s leaders hope they can equip and use the new space by sometime this fall. That will expand the Sister Bay preschool facilities from six to eight classrooms.

“We’ve done a lot of prep work, and we did work with [Superintendent] Tina [Van Meer] before she left on the curriculums we will be using,” said Trinkner-Peot. “We have a contract in place, and we have a pretty comprehensive list of 4-year-olds in the community, and they’ve been assigned to locations.”

The Children’s Center’s staff will need to adjust to certain enhancements to its programs, such as the new Sonday early-literacy program. It added Gibraltar’s Bridges math programming last year to help prepare students for kindergarten in Fish Creek.

The Children’s Center and Gibraltar District officials, including Ward, will work together to establish methods for conducting baseline assessments and other strategies.

“The programming has been in place for many years,” Trinkner-Peot said of the Children’s Center. “We already have a daily routine. We already know what our specials are, and we already know what kinds of planning we need to do. We’re fine-tuning that and making sure we are meeting all the requirements to make the collaboration successful.”

Ward said she’s pleased that the district can begin offering 4K programming for all children in the district. New Gibraltar Schools Superintendent Brett Stousland is observing as the educators and Ward work together to prepare for the pilot program.

“The partnership with Northern Door Children’s Center has been amazing,” Stousland said. “We hope to learn as much as we can in this first pilot year of the program to improve upon for families and area day care providers for an even stronger 4K program in years to come.”